The search for life 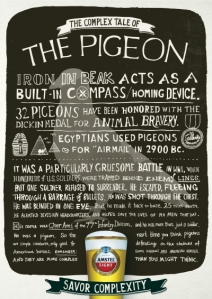 This is part of a series of posts that will examine video, print media and internet advertisements in layman terms as an exploration of modern consumerism and marketing, in an attempt to get to the root of the core messages that dictate or encourage modes of thinking, concepts of identity or promote values beyond the realm of simply selling products.

Description
Complicated story based delivery. Draws viewer in mostly due to placement of advertisement (train, bus – when there is time to read). Mixed font size and style, using hand-written typeset and varied emphasis (underline, bold) as well as intermittent pictures and symbols. Public announcement style of ad composition. The image of the product is the only non-hand drafted element. Non-linear arrangement and rough-style composition (the landscape version of this ad is a two panel style to keep viewers orientated while reading). Use of scrolls for headers and footers.

Initial response
Relies on dissemination through retention via long-term advert exposure (average viewing of ad would be less than a second; this requires almost a minute to read). Would appeal to those who see themselves as readers. Theme is generic but interesting collection of facts and fiction. Utilizes story-telling elements.

Psychological analysis
White border draws in towards brown background (others use similarly rural schemes). Single hand written panel with well-known symbology invites viewer to recollect long forgotten schooling, or non-objective based learning.
Non-patronizing fact provision using written script, underlying the theme that complexity is desired, but not to excessive amounts, and certainly apolitical. Use of writing appeals as one would enjoy sensation of being of discerning intellect.
Adopted as a identity anchor, it would indicate that there is ‘more to me than meets the eye’, that mundanity is a ‘front’, a diversion from the complexity of the individual. Uses the tag-line ‘Savor Complexity’ to remind viewer of own complexity, despite perhaps personal insecurities that one is perhaps banal and uninteresting.
Reassuring. Humanistic, compassionate and without the heavy statistic usage of modern magazine and television media. Application of diatribe story style, drawing in elements of camp-fire and rural lifestyle, ‘a simpler’ style. Feelings of home-grown, natural elements by implementing vaguely sensational story-telling language.

Conclusion
Amstel sells a basic lager and wishes to appeal to a well educated (or at least those who wish to appear so), mid-twenties to late forties demographic. Avoiding the ‘Punk’ draw of PBR and the college football elements of Budweiser and Miller, it attempts to appeal to the apathetically relaxed beer drinker, unconcerned with the ‘class’ or quality of the drink they consume, but not wishing to appear completely uncultured. It uses the story telling element, so dominant in modern advertising’, that the beer comes from somewhere, that there is more to it, like there is more to the people who consume it, as direct adherence to the current societal spasm of organic-leaning, non-chemical, non-plastic ‘natural’ lifestyles people currently crave.